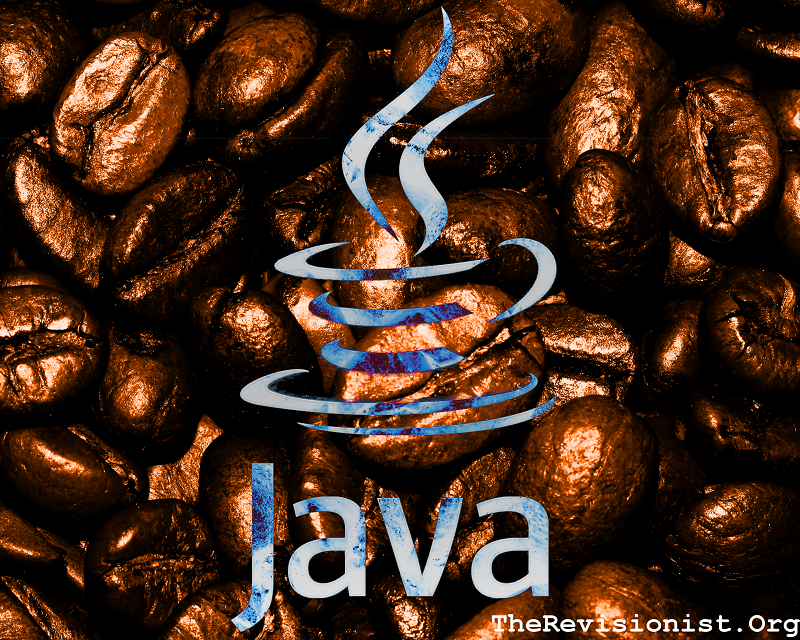 In this lesson I will be giving examples that show how classes are designed and how classes are used to make objects. Down below I will show a program that defines a Circle class that is used to make objects. The program will construct  3 circle objects that will have the radius of 1, 25, 125 and show their respective areas that are evaluated depending on the radius lengths. After that, the program will change the radius of the second circle object to 100 and display its new radius and area:

Let’s try to map the situation to a physical world scenario.

You go to a pastry shop and order a pastry. You get the pastry from the store pay for it and leave. You naturally call yourself a client of the store. So what did we understand from this?

The term client refers to any entity that requests a service from another entity. The client does not bother about how the entity providing the service actually provides the service – the client is happy as long as the service is available and fulfills its use case.

So when you run the Java program, the runtime system invokes the main method in the main class TestSimpleCircle.

Know that you can put 2 classes in one file, but only one class can be a public class. The reason why is simply because that’s how Java is designed:

Reason 1: A each public class must be kept in a separate file. This restriction makes it easy for a compiler for the Java programming language or an implementation of the Java virtual machine to find a named class within a package [Source]

Reason 2: It forces all Java code to be organized in a certain way, which in the long run helps improve code readability. The Java designers chose a strict approach that enforces their idea of good design practices, and this is part of that theme. Contrast that with the anything-goes attitude in Perl. [Source]

So by using the same method, we have obtained 3 similar objects (circle1, circle2, circle3) that differ only by the data assigned to them. The data field of the 3 circle objects can be accessed by using the object’s reference. Such as circle1.radius, circle2.radius, and circle3.radius would retrieve the object’s respective radius values. With that data, we are able to evaluate their areas by using the fetchArea() method (lines 38-39).  Again, the reference of the objects (circle1, circle2, circle3) can be used to invoke the fetchArea() method (lines 38-39) to find the area. Doing this looks like: circle1.fetchArea(), circle2.fetchArea(), circle3.fetchArea().

Lastly you can see in the above Java program that the radius of circle2 is altered to 100 in line 18, and circle2‘s new radius and area are displayed in the line 19. 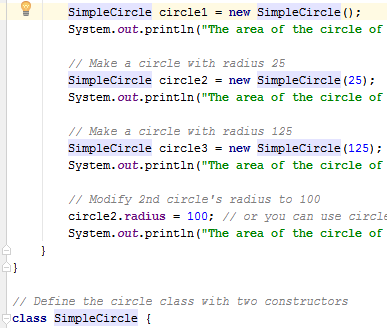 Know that there are many ways to write the same Java program. For instance; from Example 1 you can combine the two classes, TestSimpleCircle and SimpleCircle,  into one class. That is what I will be showing you in this example.

Because the single main class (line 2) has a main method, we can make the Java interpreter execute the program. You’ll notice that the same method method is used in this example 2 as in example 1. This goes to show that just the addition of a main method to a class is all you need to test that class.

In this next example I will be referring to an Laptop. Each Laptop is an object with many different states (power off or on, current time, current volume, etc.) and many different behaviors or actions (change Laptop time, change volume level, turn power on or off). You can use a class to model a Laptop’s functions. Here is a UML diagram that shows the Laptop class:

And here is the Java program modeled after the UML diagram above:

In the Laptop class, the methods and constructors are defined as public so they can be accessed from other classes. Note that the time and volume level do not change if the Laptop is not on to begin with. Before any change occurs, the values of the time and volume are checked so that they are in the correct range.

Example 3 | Part 2 | Making use of the public modifier

Now here’s another example that shows the Laptop class making two objects. (note that the public modifier used in front of the main class allows this program to fetch the methods used in the Laptop class from the program above, Laptop.java).

This program makes two objects on lines 6 & 12, invoking the methods on the objects to perform actions for setting and increasing the time and the volume levels. The program shows the state or status of the objects on lines 19-20. As you can see, the methods are invoked using such syntaxes like laptop1.turnOn()on line 7 and laptop1.time on line 19.