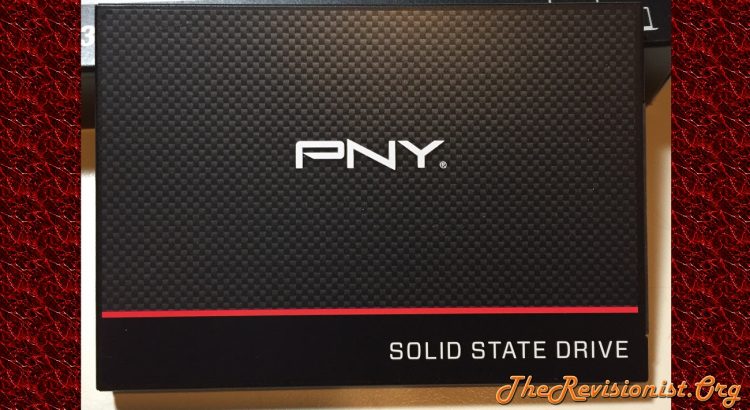 In this article, I will be talking about the PNY 2.5” SATA III Internal Solid State Drive (SSD) model CS1311 that I bought. This SSD has a small 2.5” form factor that allows it to fit laptops and regular desktop computers, weighing only 2 ounces-ideal for a laptops portability. To contrast, a regular Western Digital Hard Disk Drive (HDD) weighs about double the amount. 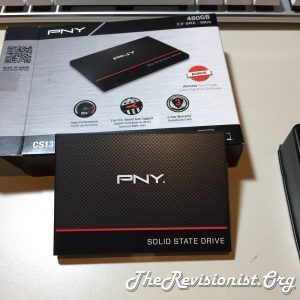 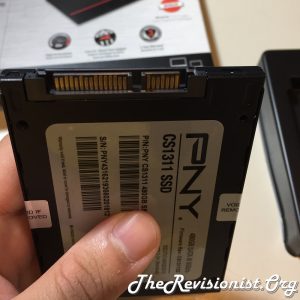 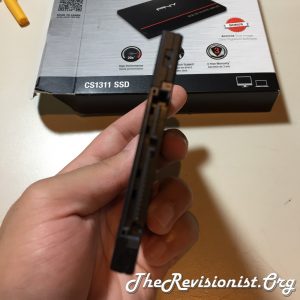 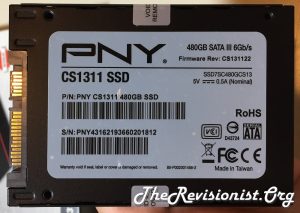 The PNY SSD is Fast & Furious

There are many reasons why you should switch from using a regular hard disk drive to a solid state drive (SSD). For starters, everything about the SSD is plain faster. Faster boot time, faster application loading, faster reading and writing, etc.

Testing that same drive myself with CrystalDiskMark, I found it to have a sequential read/write speed of 565MB/535MB. Slightly more than advertised. Nice! 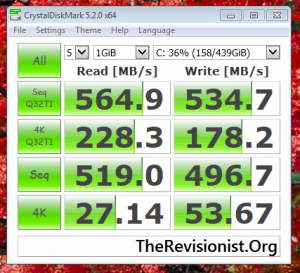 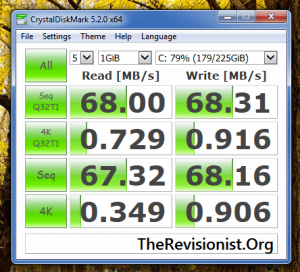 Note that sequential read/write refers to accessing a large whole blocks of data are read. This type of access is common when reading large files like videos, music, and images.

Whereas 4K random read/write refers to accessing small 4K blocks of data from random locations on the drive. This type of access pattern is very common during operating system startup, where lots of configuration and driver files must be read from the drive. This means that you’ll find an SSD to have the biggest impact for cutting the time it takes for your OS to boot up; but you’ll still see significant gains in speeds moving & copying files, in installing and using program applications.

I personally found that my OS, which use to take up to a minute or more to boot up on a HD drive, now takes less than 30 seconds to boot. For me, programs and applications also took half as long to load, and made video editing software like Hitfilm 4 express actually usable on my Dell Latitude e6420 laptop. Buying an SSD meant the difference between buying a new laptop, since I needed something a bit more powerful so that I could do video editing.

Compared to other SSDs in the market, the Samsung 850 EVO 250GB 2.5-Inch SATA III Internal SSD (MZ-75E250B/AM) provides up to 540/520 and the Crucial BX200 240GB SATA 2.5 Inch Internal Solid State Drive – CT240BX200SSD1 tops out at 540/490. In user tests, the Samsung usually performs right on the benchmark, but according to some reviews, the Crucial SSD seems to have occasional problems. The PNY CS1311, on the other hand, often outperforms its own benchmarks in both my tests and the tests done by other reviewers.

On top of that, Solid State Drives are lot more reliable than Hard Disk Drives. For laptop users, an SSD is a must because a laptop experience a lot more shock than a stationary desktop computer. In reality, many people have lost their precious data to dropping their HDD-based laptops on the ground, or bumping the laptop around, such that the Hard Disk Drive would immediately or eventually fail due to accruing mechanical mis-alignments and/or the read/write needle head skipping & skidding on the disks from the shock. But because there are no moving parts in an SSD, they are 30 times more resistant to shock than a regular HDD. This means that your data is a lot more likely to survive in a SSD than a HDD from fall shock and random movements.

Another benefit that I’d like to mention is that a SSD generates a lot less noise pollution than a HDD, not only because they don’t have moving parts, but also because less heat is generated, meaning an overall quieter computer fan.

If you are using an older system, the Serial ATA interface may be set up in “Legacy” or “IDE” mode. I recommend searching online to verify that your BIOS is set to AHCI before installing Windows, assuming that older OS distro supports AHCI.

If you are using an SSD with Linux, specifically for Linux Mint 18.1, Ubuntu 16.04 and Debian, I would recommend reading their guide on optimizing your SSD for peak performance.

Also, when you buy your SSD, you have to consider the size that you are receiving. For example, the computer needs to sector the space on the hard drive. Also disk capacity is marketed in gigabytes (10003 bytes), while the operating system displays the size in gig so a 120gb SSD would shrink to 105gb. Also, Windows 10 64bit Home edition OS takes up about 29 gigabytes, and the regular suite of office programs like Photoshop and your flavor of internet browser can take up another 10 gigabytes. So if you bought a 120gb SSD, you’d be left with 60gb of free space; 180gb of free space for a 240gb SSD, 420gb of free space for a 480gb SSD, and 900gb of free space for a 960gb SSD.

What takes up extra space from the hard drive?

So I imagine that the Acronis Migration software that comes with the PNY SSD works just fine. I did install it onto my computer, but I wasn’t able to use it due to the weird way my last generation computer’s Hard Disk Drive was partitioned. But that’s not my point here; what I wanted to warn you about is to make sure that you uninstall the Acronis Migration Software after you have used it to clone your drives.

This advice comes from an odd experience that I had with my CPU. Normally my CPU is near the baseline like this:

But after cloning my Western Digital HDD to my new PNY SSD, I saw that although my SSD did provide a significant improvement in speed, the fan of my laptop kept running like an aircraft about to take off the runway. This was happening even though the computer was apparently idle, without me actively opening & using programs.

So what gives? I opened the Task Manager, and went to the performance tab to see that my CPU was running at 25 % with no open application running. Except that I found under the processes tab that the Acronis was hogging my CPU resources, even though nothing was happening! After disabling and uninstalling Acronis, I found that my SSD actually delivered more speed than before and my CPU was free of ~23% of resources stolen by the Acronis program.