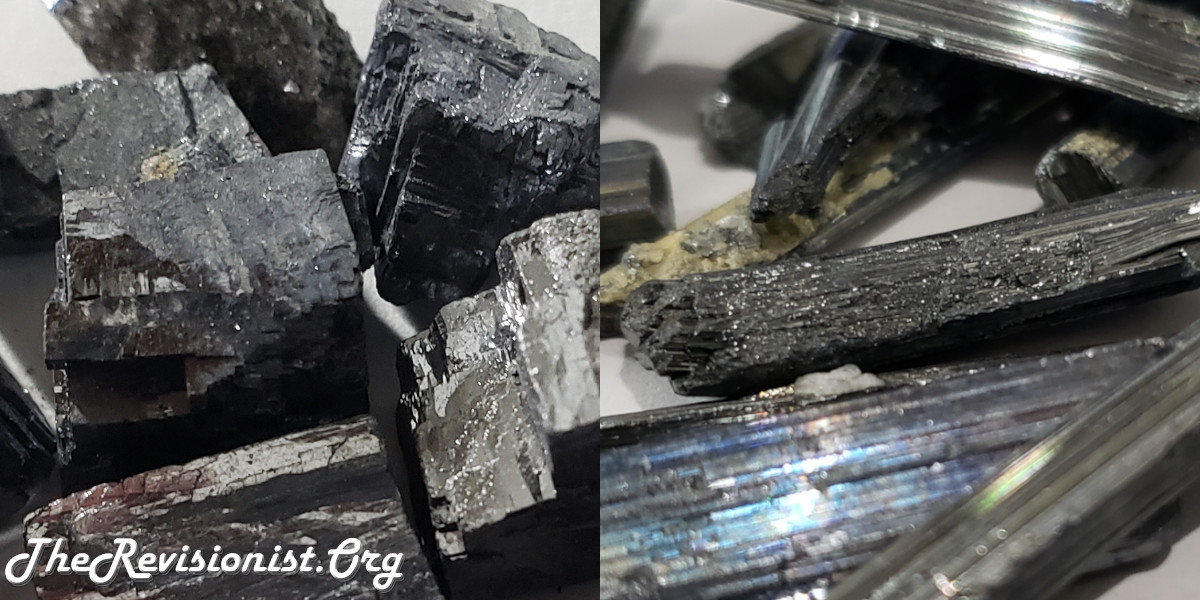 The Revisionist > Bio-Hacking > Is Ithmid Kohl Made Out of Galena vs Stibnite?

There is a debate among the people online and between literature that talk about whether the original kohl ithmid (Ethmid) is made of Galena (lead sulfide, PbS) or Stibnite (Antimony sulfide, Sb2S3). The majority of the kohl you can find now a days do not contain even a small amount of antimony- if any at all. Rather, the majority of Middle Eastern kohl is made using Galena ore, resulting in a high lead sulfide content.

In Ancient Egypt, the mineral ore Galena was known as “mestem” or “stim”. “Stim” is similar to the names used in later Ancient Greece, “Stimmi” and “Stibi”. In Latin a similar word known as “stibium” was used. Stibium in Latin is used to refer to Antimony, but actually this is where the mistranslated comes from. That is one reason why you will find a lot of authors claiming that Antimony is the active ingredient to Mestem or the “Ithmid” used by the Ancient Egyptians and Bedouins in their authentic kohl eyeliner preparations. Where in actuality Lead Sulfide or Galena is the main ingredient for preparing the authentic black-grey kohl used by both Ancient Egyptians & the Bedouins. So in reality Stibium, Mestem, and most likely Ithmid all refers to Galena (lead sulfide) based kohl preparations. [1]

To further support this claim, scientists analyzed and confirmed that Galena was the main constituent of a huge number of kohl samples used by the Ancient Egyptians of Fayum between 2000 to 1200 BC. Those samples are special given that they are still preserved in their original kohl containers, which protects from contaminants changing the make up of the ancient kohl. So other than Galena as the main ingredient, a lesser amount of white lead salts were found, such as cerussite (PbCO3), and synthetically synthesized laurionite (PbOHCl) and phosgenite (Pb2Cl2CO3). [1]

The presence of Galena, Laurionite, and Phosgenite in Ancient Egyptian kohl conferred particular medical benefits that I will elaborate in a future article. The Ancient Egyptian Ocular medicine was quite strong for the time, relying on lead-based kohl powders to help fight eye-related diseases by stimulating the production of Nitric Oxide in the eye.

Another consideration is the geographic availability of Galena vs. Stibnite in the areas that kohl is traditionally used. Galena is found near the Aswan (near the Nile River), and Eastern Desert region at mountains Gebel-el-Zeit and Gebel Rasas, which are near the Red Sea. These regions are all different parts of Egypt.

On the other hand, Ancient Antimony mines were not found in Egypt, Sinai, Saudi Arabia, and Iran. Back then, it was common for those countries to use Galena ore for making kohl or kajal/kahal. Historically, antimony mines in the Middle East were present in Turkey, the country next to it called Armenia, and Macedonia- which is the country right above and a part of Greece.

Furthermore, 2 large ancient galena mines were found in Egypt. From here, the Galena minerals were extracted for the preparation of Egyptian and Saudi Arabian kohl. This evidence further supports that antimony was mistaken for galena, and that galena is the actual main ingredient of kohl & surma. Galena ore is still used to this day for making traditional eyeliner in the Middle East. [1]

As a side note, the poorer denizens of Ancient Egypt may have instead used the soot of oil lamps or the burnt ash remains of Frankincense Gum as kohl for the eyes. Soot is actually not good for the eye, as burnt substances usually have cancerous and mutagenic chemicals that form through combustion. Although it’s toxicity to us is probably quite low, given that people tend to eat overcooked meat without much issue.

So What is Ithmid Made Out of?

As for what people now call in the Middle East “Ithmid” or “Ethmid”, it is the Galena mineral composed of lead sulfide. Most studies have found that Middle Eastern samples of kohl that are commonly used did not have antimony, or very few samples had antimony, or the samples had very low concentrations of antimony.  For example, in study [2] the researchers tested the chemical composition of 3 different kohl samples. They found the 1st one to be mainly composed of PbS. The 2nd sample had a composition of PbS and lead(II) carbonate (PbCO3). The 3rd sample was composed of carbon graphite. So as you can see, it is common now a days to find Lead Sulfide as a primary constituent in authentic middle eastern kohl.

But let me make this clear. I actually do not know with confirmation what the Ithmid that the Prophet Muhammad (peace be upon him) mentioned is in reference to. However, there are a number of studies that indicate the kohl popularly used by the Ancient Egyptians and Bedouins is made of Galena. And there are studies that even show that powderized Galena does exert positive medical effects on the eye.

On top of that, lead sulfide from Galena is a quite insoluble form of lead, such that it is not easily absorbed into the body- thus is a lot safer than other forms of lead. So in future articles, I will discuss the medicinal effects that powderized Galena exerts on the eye, and the relatively low toxicity of Galena.

2 thoughts to “Is Ithmid Kohl Made Out of Galena vs Stibnite?”