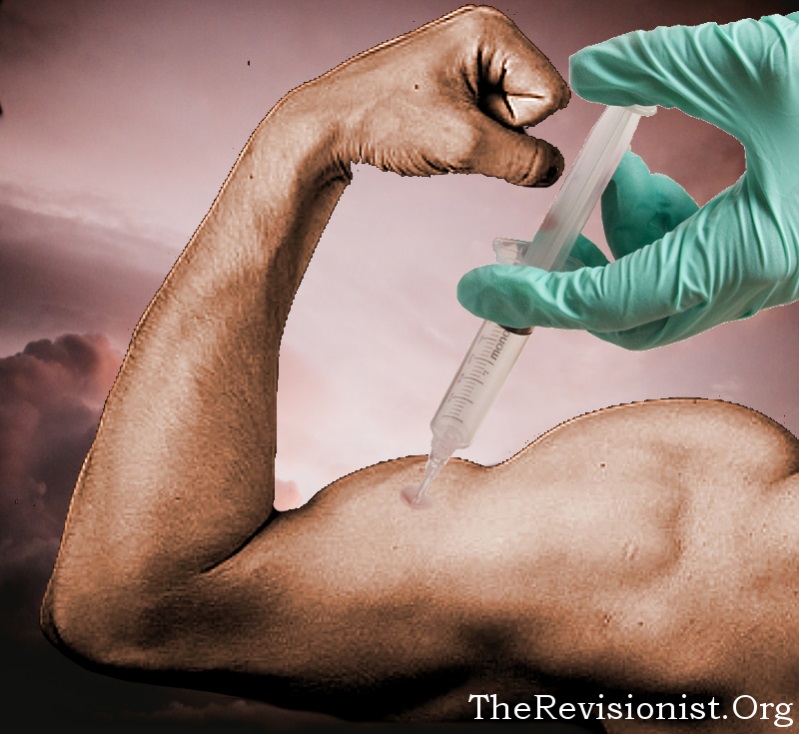 What is Growth Hormone?

Growth Hormone (GH), also known as somatotropin, is a anabolic peptide hormone produced by the anterior pituitary gland in the brain. GH is released in the body either in response to eustress like exercise, to melatonin in our sleep, etc. Once GH is released into the body, it stimulates the liver to make something called “insulin-like growth factor 1” (IGF-1), and this IGF-1 hormone then triggers the growth and repair of bones and body tissues, protein synthesis of muscles, cell reproduction and overall regeneration. Another effect of Growth Hormone is that it raises the concentration of glucose and free fatty acids floating around in our blood stream.

The body’s natural growth hormone production is controlled by the neurohormone Gonadotropin-releasing hormone (GHRH), Growth hormone-releasing peptide (GHRP), and somatostatin, and is normally released in pulses or bursts throughout the day. There are often as many as 20 daily surges, with the largest release occurring shortly after you fall asleep.

HGH is especially important for normal growth in children, and hGH levels rise sharply throughout puberty, peak at about age 20, and then slowly decrease throughout adulthood; although a healthy pituitary never totally ceases hGH production.

Note that some doctors in the US prescribe Growth hormone to weak elderly patients to increase vitality; although whether this is safely effective or not remains unanswered. But a type of GH known as bovine somatotropin is abused in the US dairy industry to increase the amount of milk produced in dairy cows. The dairy cows get sick from this type of GH supplementation, but my conjecture is that the combination of a sedentary lifestyle and the poor treatment of the animals dictates how GH affects the cows.

What Happens if we are Deficient in Growth Hormone?

In adults, true medical deficiency of growth hormone may result from disease, tumors, radiation, or any trauma that damages critical areas of the pituitary. This can lead to some significant health challenges like weight gain, cardiovascular disease, cholesterol abnormalities, fatigue, decreased immune response, arthritis, increased insulin resistance, adult onset diabetes, hair loss, sarcopenia (loss of muscle), and osteoporosis. Not surprisingly, hGH therapy has proven to be very helpful for these GH-deficient individuals.

What Factors affects the Production of Growth Hormone?

Factors that affect the production of Growth Hormone in the human body are:

As the saying goes, “Early to bed, early to rise, makes a man healthy, wealthy, and wise”

This saying is indicative of that fact that we should be going to bed earlier in order to matches our circadian rhythm, or sleep cycle. Usually the falling of the sun stimulates the production of melatonin because the body detects through the eyes that the environment has become darker. In sync with the circadian rhythm, melatonin production is at its highest early in the night and tapers off the later it gets. Because Melatonin stimulates growth hormone secretion, our bodies produce more growth hormone when we make a habit of sleeping earlier to match a natural circadian rhythm.

From the graph above, you will notice that growth hormone peaks early in the night because that is when the bulk of melatonin is secreted by our body. Note that these early hours of sleep is when we experience the largest amount of Growth Hormone secretion in a 24 hour period; making the earliest hours of sleep that much more important and detrimental to miss. Know that these first few hours of sleep is composed of the third of NREM sleep, also known as Deep Sleep or Slow-Wave Sleep (SWS). SWS is integral to memory consolidation (retaining what you learned).

Also notice from the graph above that the levels of Growth Hormone produced in the body is inversely related to levels of cortisol in the body. That is because cortisol is an antagonists to melatonin secretion; the body produces less melatonin when there are higher levels of cortisol present in the body. You may interpret this to mean that trying to sleep while under a lot of stress will prevent you from sleeping deeply by inhibiting the secretion of melatonin, and therefor inhibiting the proper release of Growth Hormone at night.

Because melatonin and cortisol antagonize each other, growth hormone levels taper off as cortisol levels increase. The gradual increase in cortisol is supposed to happen; cortisol is responsible for waking us up in the morning and supplying energy to the body the longer we go without food, as indicated on the graph with the rise of cortisol levels and the slow decline of glucose and insulin levels the longer the person stays asleep at night.

Note that you should be aware that because many of us use electronic devices late into the night, our circadian rhythms becomes skewed from the (blue) light that is emitted from the display. The blue light spectrum that is emitted from those electronic devices and other sources inhibit the melatonin secretion that naturally should come at night. As a result, the quality sleep is stunted from blue light exposure, and similarly the amount of growth hormone produces at night is also stunted.

At the extreme, the nocturnal surges of GH that is experiences by those who sleep on time totally disappears if you decide not to sleep for the whole night.[NIH]

Exercise directly and indirectly boosts the production of Growth Hormone in the human body.

Recent studies have found that exercise is an extremely potent stimulus for GH secretion; for example, both aerobic and resistance exercises yield a sharp increase in GH secretion. Specifically, the intensity of the exercise is linearly related to the amount of GH released as a response.

Another interesting fact is that although a single session of exercise temporarily increases GH secretion, the overall GH secretion at rest isn’t significantly raised. However, if the person undergoes repeated sessions of aerobic exercise within a 24 hour period, then these sessions result in a 24 hour increase of overall GH concentrations- whether you are exercising or at rest.[Source]

An odd fact is that endurance training results in decreased resting hGH and blunts the exercise-induced Growth Hormone response; which could be because of an increased tissue sensitivity to hGH. That indicates that the amount of hGH (human Growth Hormone) produces in the body is not the only factor to consider. Our body’s tissue sensitivity to hGH is another factor that must be considered as well. [Source]

What is detrimental to Growth Hormone production?

There are negative health affects that can be observed from individuals who don’t produce enough GH in their body. Usually, the obese and the elderly are susceptible to a lack of GH production, with the elderly producing 4 to 7 times less than a younger individual. That possibly could mean that the elderly have to incorporate more exercise into their lifestyle in order to keep their body healthy and young.

Also, eating right after a workout negates the GH boost you get from said workout.

Other factors that negatively affect Growth Hormone secretion include:

Why Growth Hormone shouldn’t be Taken as a (regular) Supplement?

Remember, the keyword is “supplement”. Our bodies are usually designed to produce the optimal amount of Growth Hormone. That’s why I believe that Growth Hormone is best to stimulate via naturals means like exercise; but not by taking a shortcut by taking GH supplement (unless prescribed by a doctor to treat an illness). So you can see that GH supplements used by bodybuilders do have repercussions with frequent high-dosed use of GH supplements.

For example, GH supplementation at medically approved dosages have the “mild” side effects of bloating, carpal tunnel syndrome, gynecomastia, increase in blood pressure, swelling of the optic nerve, and a decrease in thyroid hormone production.

There’s also a concern about the possibility of an increased cancer risk with long-term hGH treatment. Insulin-like growth factor-1 promotes the growth of cells and prevents them from dying, which is what cancer cells do — they grow out of control and don’t die.