So just recently I’ve been experimenting with wormwood as a possible substance for increasing Cognitive function. Yes, it’s the same herb used to make the vial absinthe that made the infamous painter Vincent Van Gogh enter a psychosis that caused him to cut his ear off. Although I would argue that alcohol is the fuel for any psychosis, I do warn that Wormwood is a potentially dangerous herb in large quantities– especially in a concentrated form, like an essential oil.

Note that brain damage is experience in people who drink absinthe, the thujone-alcohol mixture. I do believe that such a combinations causes brain damage to the brain by having a synergistic toxicity, but not necessarily Thujone itself in small quantities is responsible for the brain damage. The brain damage may also likely be a result of the heavy metal salts used to dying the Absinthe drink a bright green color. I would also like to add that alcohol also damages the brain, reducing the brain’s long term potentiate of its neurons- which is required for learning new things.

Other signs of toxicity includes “… digestive disorders, thirst, restlessness, vertigo, trembling of the limbs, numbness of the extremities, loss of intellect, delirium, paralysis, and death.”[1]

The main active chemical in Wormwood is Thujone. It is reported that Thujone has similar effects to THC in cannabis without the associated laziness and mental fog. 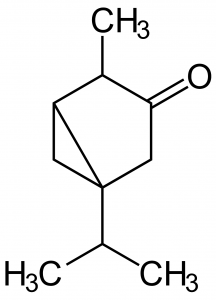 Thujone is a GABAA receptor Antagonist. In small amounts, Thujone can induce a state of excitation, but in large amounts can causes epileptic-like involuntary muscle convulsions and kidney failure.

So the nuerotoxicity from wormwood, and thujone in general, is caused by excitotoxicity; which is when neurons are damaged and killed by the over activation of neural receptors. Again, the dose makes the poison.

But wormwood isn’t all bad, depending on the dose, right? People in the past have found beneficial uses from wormwood. 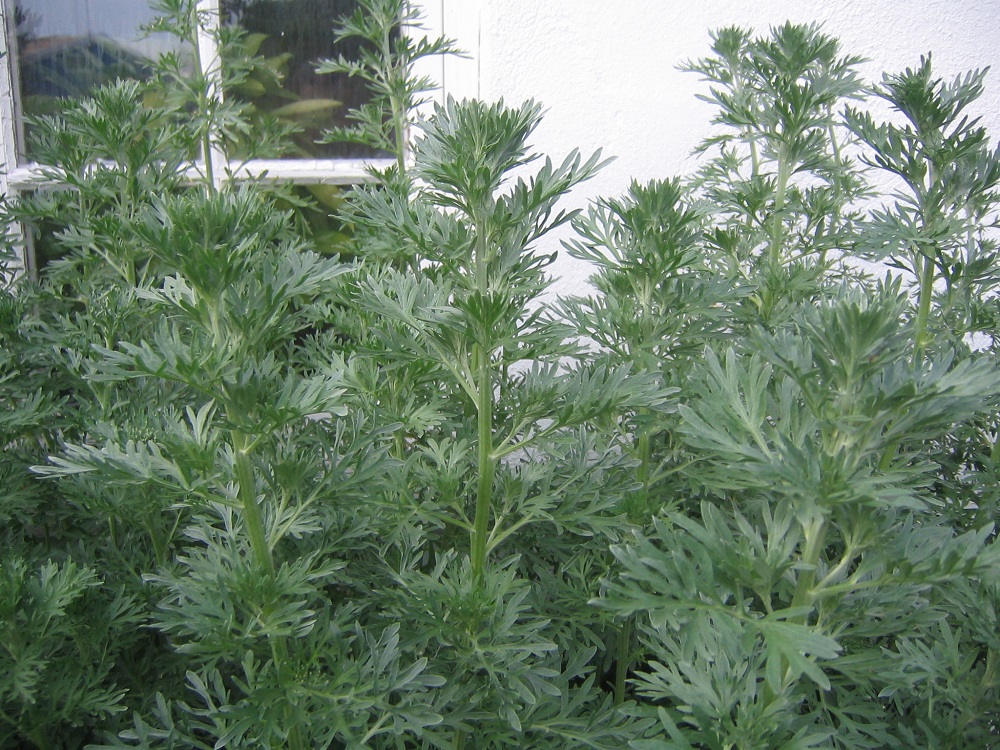 For example, Wormwood was traditionally used in small quantities to stimulate appetite, relieve indigestion, as an insecticide, as an anthelmintic- meaning that it is used to expel parasites & worms by stunning and killing them, and as a digestive remedy- where the bitterness of wormwood stimulates stomach acid secretion and bile secretion from gall bladder. Also in western European traditional herbal medicine, one of the uses of wormwood is to restore a declining mental function. I believe that this is so because people saw that it excites the mind, and thus could be used to uplift the dullness of the mind that comes with senior senility.

I have an interpretation for the existence of these properties in Wormwood. The active chemicals in Wormwood (perhaps Thujone) kill various forms of “infestation” in the body such as worms & parasites, pathogenic bacteria and fungi. Usually the existence of infestation in the body causes increased inflammation because the immune system is busy fighting these invaders. However, if you remove or decrease the causes of inflammation, you will achieve an “anti-inflammatory” effect.

But I wanted to see if it was true that a minute quantities of Wormwood actually does make a person more creative or productive on what they are doing. So in the name of science I tried a small, therefore safe, dose of wormwood to see what kind of effects I could get out of it.

What I personally did to take the Wormwood is chew on a small sprig or leaf from the Worm Wood plant and spit it out, so that the main pathway of absorption for thujone is sublingually. What I observe from chewing on the thujone is that the speed & clarity of my thoughts do increase, but if I chew on too much I tend to get a headache. IMO, coffee seems to be a better option.

One thought to “Wormwood: Playing with Inspiration, An (Anti-)Nootropic Herb”