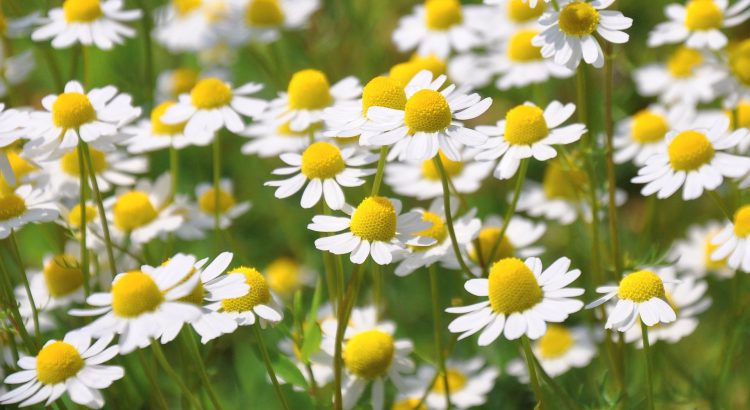 Chamomile is an ancient medicinal herb that has a great range utility, having roots from the daisy family (Asteraceae/Compositae) of plants, and is widely known by two main varieties: German Chamomile (Chamomilla recutita) and Roman Chamomile (Chamaemelum nobile). The terpenoids and flavonoids in the chamomile flowers are the main active constituent responsible for the flower’s medicinal properties. Chamomile is used to treat:

A reason why chamomile is so popular as a medicinal herb may be explained by the fact that this herb works slowly, gently, with little to no toxic side effect. Of course, as with anything, the dose makes the poison.

Chamomile is popularly taken medicinally as a tea, and might I add that I love drinking chamomile tea for its velvety, honey-like flavor. Its just a great drink for relaxation, lowering stress and cortisol, and to bring about a peace of mind. I would suggest buying the chamomile in bulk, as you’d get the most bang for your buck.

How to Brew Chamomile Tea 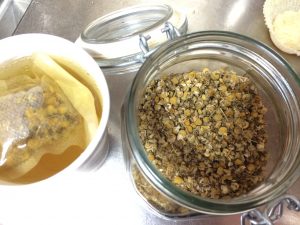 Making herbal tea, also known as a herbal infusion, requires to take notice of the color, taste, and aroma as you brew the tea “just right”.

The tools you’ll need is simply a non-aluminum pot that a tight fitting lid, a tea strainer, and a tea cup. That’s it.

The ratio of water to herbal content is typically two cups of water per 1 ounce of dried herb (1 ounce ~ 1-2 tablespoons), or 1 handful of the fresh herb.

The water should be less than boiling hot. You can simply bring the water to a boil, let it rest for 1-2 minutes, and then add the herbs to make the tea.

Regular tea, like green tea or orange pekoe tea, takes a brew time of about 2 to 5 minutes. However, chamomile tea takes about 10 to 20 minutes; less if you grind the chamomile flowers into a powder before you make the tea. Also make sure that the chamomile flower is brewed in a closed container, so that the essential oil doesn’t evaporate away.

Finally, go ahead and strain the herbal infusion, and drink your freshly brewed chamomile tea!

The chamomile flower contains 0.24% to 1.9% volatile oil of different types.

When the essential oil of the Chamomile flower is extracted through steam distillation, it is observed that the freshly extracted essential oil can range in color from brilliant blue to deep green. However, the essential oil starts to turn into a dark yellow color with increased storage time. Note that despite the fading color, the oil does not lose it’s medicinal potency.

The principal components of the essential oil extracted from the German chamomile flowers are the terpenoids α-bisabolol and its oxide azulenes including chamazulene and acetylene derivatives. Chamazulene and bisabolol are very unstable and are best preserved in an alcoholic tincture.

The essential oil of Roman chamomile contains less chamazulene and is mainly constituted from esters of angelic acid and tiglic acid. It also contains farnesene and α-pinene. Roman chamomile contains up to 0.6% of sesquiterpene lactones of the germacranolide type, mainly nobilin and 3-epinobilin. Both α-bisabolol, bisabolol oxides A and B and chamazulene or azulenesse, farnesene and spiro-ether quiterpene lactones, glycosides, hydroxycoumarins, flavanoids (apigenin, luteolin, patuletin, and quercetin), coumarins (herniarin and umbelliferone), terpenoids, and mucilage are considered to be the major bio-active ingredients.

Other major constituents of the flowers include several phenolic compounds, primarily the flavonoids apigenin, quercetin, patuletin as glucosides and various acetylated derivatives. Among flavonoids, apigenin is the most promising compound. It is present in very small quantities as free apigenin, but predominantly exists in the form of various glycosides.

Chamomile as an Anti-Inflammatory

The flowers of chamomile contain 1–2% volatile oils including alpha-bisabolol, alpha-bisabolol oxides A & B, and matricin (usually converted to chamazulene and other flavonoids which possess anti-inflammatory and antiphlogistic properties. A study in human volunteers demonstrated that chamomile flavonoids and essential oils penetrate below the skin surface into the deeper skin layers. This is important for their use as topical antiphlogistic (anti-inflammatory) agents. One of chamomile’s anti-inflammatory activities involve the inhibition of LPS-induced prostaglandin E(2) release and attenuation of cyclooxygenase (COX-2) enzyme activity without affecting the constitutive form, COX-1.

Most evaluations of tumor growth inhibition by chamomile involve studies with apigenin which is one of the bioactive constituents of chamomile. Studies on preclinical models of skin, prostate, breast and ovarian cancer have shown promising growth inhibitory effects. In a recently conducted study, chamomile extracts were shown to cause minimal growth inhibitory effects on normal cells, but showed significant reductions in cell viability in various human cancer cell lines. Chamomile exposure induced apoptosis in cancer cells but not in normal cells at similar doses. The efficacy of the novel agent TBS-101, a mixture of seven standardized botanical extracts including chamomile has been recently tested. The results confirm it to have a good safety profile with significant anticancer activities against androgen-refractory human prostrate cancer PC-3 cells, both in vitro and in vivo situation.

It has been suggested that regular use of flavonoids consumed in food may reduce the risk of death from coronary heart disease in elderly men. A study assessed the flavonoid intake of 805 men aged 65–84 years who were followed up for 5 years. Flavonoid intake (analyzed in tertiles) was significantly inversely associated with mortality from coronary heart disease and showed an inverse relation with incidence of myocardial infarction. In another study, on twelve patients with cardiac disease who underwent cardiac catheterization, hemodynamic measurements obtained prior to and 30 minutes after the oral ingestion of chamomile tea exhibited a small but significant increase in the mean brachial artery pressure. No other significant hemodynamic changes were observed after chamomile consumption. Ten of the twelve patients fell into a deep sleep shortly after drinking the beverage. A large, well-designed randomized controlled trial is needed to assess the potential value of chamomile in improving cardiac health.

Topical applications of chamomile have been shown to be moderately effective in the treatment of atopic eczema. It was found to be about 60% as effective as 0.25% hydrocortisone cream. Roman chamomile of the Manzana type (Kamillosan (R)) may ease discomfort associated with eczema when applied as a cream containing chamomile extract. The Manzana type of chamomile is rich in active ingredients and does not exhibit chamomile-related allergenic potential. In a partially double-blind, randomized study carried out as a half-side comparison, Kamillosan(R) cream was compared with 0.5% hydrocortisone cream and a placebo consisting only of vehicle cream in patients suffering from medium-degree atopic eczema. After 2 weeks of treatment, Kamillosan(R) cream showed a slight superiority over 0.5% hydrocortisone and a marginal difference as compared to placebo. Further research is needed to evaluate the usefulness of topical chamomile in managing eczema.

Chamomile is used traditionally for numerous gastrointestinal conditions, including digestive disorders, “spasm” or colic, upset stomach, flatulence (gas), ulcers, and gastrointestinal irritation. Chamomile is especially helpful in dispelling gas, soothing the stomach, and relaxing the muscles that move food through the intestines. The protective effect of a commercial preparation (STW5, Iberogast), containing the extracts of bitter candy tuft, lemon balm leaf, chamomile flower, caraway fruit, peppermint leaf, liquorice root, Angelica root, milk thistle fruit and greater celandine herb, against the development of gastric ulcers has been previously reported. STW5 extracts produced a dose dependent anti-ulcerogenic effect associated with a reduced acid output, an increased mucin secretion, an increase in prostaglandin E (2) release and a decrease in leukotrienes. The results obtained demonstrated that STW5 not only lowered gastric acidity as effectively as a commercial antacid, but was more effective in inhibiting secondary hyperacidity.

Inflammation is associated with many gastrointestinal disorders complaints, such as esophageal reflux, diverticular disease, and inflammatory disease. Studies in preclinical models suggest that chamomile inhibits Helicobacter pylori, the bacteria that can contribute to stomach ulcers. Chamomile is believed to be helpful in reducing smooth muscle spasms associated with various gastrointestinal inflammatory disorders. Chamomile is often used to treat mild skin irritations, including sunburn, rashes, sores and even eye inflammations but its value in treating these conditions has not been shown with evidence-based research.

Chamomile as a Sleep Aid

Traditionally, chamomile preparations such as tea and essential oil aromatherapy have been used to treat insomnia and to induce sedation (calming effects). Chamomile is widely regarded as a mild tranquillizer and sleep-inducer. Sedative effects may be due to the flavonoid, apigenin that binds to benzodiazepine (BDZ) receptors in the brain. Studies in preclinical models have shown anticonvulsant and CNS depressant effects respectively. Clinical trials are notable for their absence, although ten cardiac patients are reported to have immediately fallen into a deep sleep lasting for 90 minutes after drinking chamomile tea. Chamomile extracts exhibit benzodiazepine-like hypnotic activity. In another study, inhalation of the vapor of chamomile oil reduced a stress-induced increase in plasma adrenocorticotropic hormone (ACTH) levels. Diazepam, co-administered with the chamomile oil vapor, further reduced ACTH levels, while flumazenile, a BDZ antagonist blocked the effect of chamomile oil vapor on ACTH. According to Paladini et al., the separation index (ratio between the maximal anxiolytic dose and the minimal sedative dose) for diazepam is 3 while for apigenin it is 10. Compounds, other than apigenin, present in extracts of chamomile can also bind BDZ and GABA receptors in the brain and might be responsible for some sedative effect; however, many of these compounds are as yet unidentified.

Chamomile has been reported in the treatment of generalized anxiety disorder (GAD). But the reports seem contradictory as an earlier report suggests that German chamomile showed significant inhibition of GAD activity. The recent results from the controlled clinical trial on chamomile extract for GAD suggests that it may have modest anxiolytic activity in patients with mild to moderate GAD. Extracts of chamomile (M. recutita) possess suitable effects on seizure induced by picrotoxin. Furthermore, apigenin has been shown to reduce the latency in the onset of picrotoxin-induced convulsions and reduction in locomotor activity but did not demonstrate any anxiolytic, myorelaxant, or anticonvulsant activities.

Studies suggest that chamomile ameliorates hyperglycemia and diabetic complications by suppressing blood sugar levels, increasing liver glycogen storage and inhibition of sorbitol in the human erythrocytes. The pharmacological activity of chamomile extract has shown to be independent of insulin secretion, and studies further reveal its protective effect on pancreatic beta cells in diminishing hyperglycemia-related oxidative stress. Additional studies are required to evaluate the usefulness of chamomile in managing diabetes.