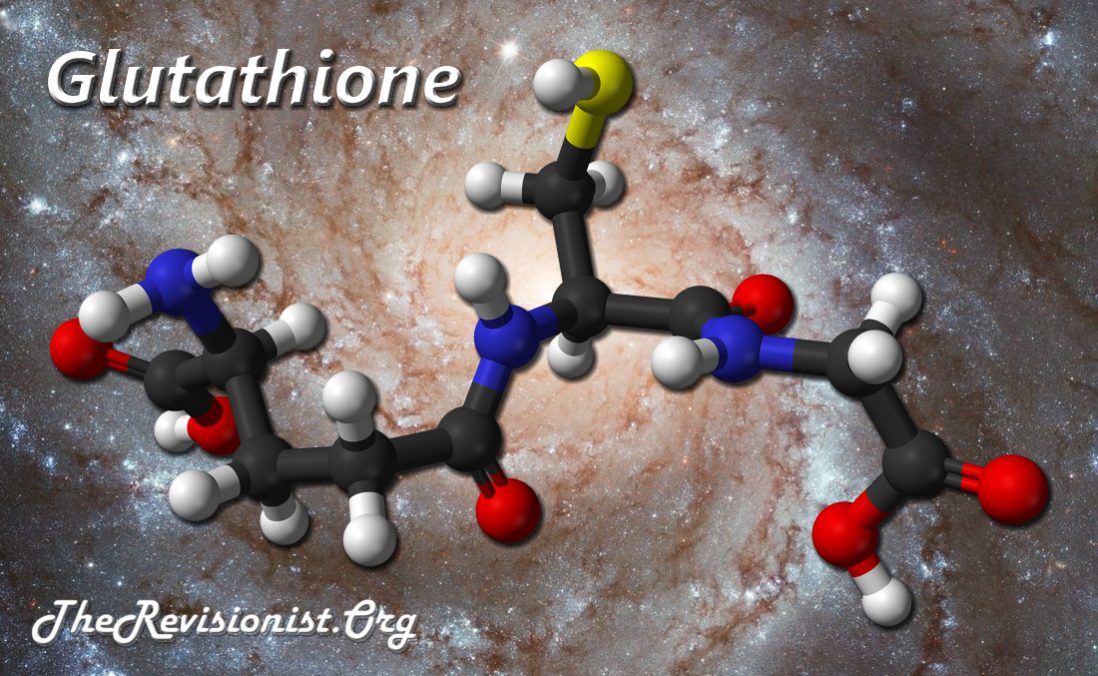 Glutathione is our body’s master antioxidant. It prevents our cellular components from being damaged by free radicals and substances that generate free radicals, such as heavy metals.

Glutathione (GSH) is a tripeptide non-protein thiol that acts as an antitoxin & antioxidant which combats oxidative stress. Specifically, glutathione protects cells from being damaged by free radicals that are produced as a by-product of chemical oxidation. Glutathione is found in plants, animals, fungi, and some bacteria. In mammals, glutathione is found in every cell of the body, with particularly high concentrations in the liver (given that the liver is the main detoxifying organ) the spleen (main immune defense system), and especially the skin (largest organ of the body).

Glutathione concentrations are thousands of times higher than C, E, & A vitamins in the body.

Past a certain point after childhood, the body starts producing less glutathione (GSH) than it used to. This decrease in GSH levels may contribute to chronic diseases such as diabetes mellitus, pulmonary fibrosis, liver fibrosis, cholestatic (reduction in bile flow) liver injury, endotoxemia (microbial products circulating in the blood to cause toxicity), and drug-resistant tumor cells. In other words, glutathione helps to prevent all of these pathological diseases & conditions.

Inside the cell, Glutathione (GSH) is biosynthesized in the cytosol, which is the aqueous part of the cytoplasm that suspends organelles and particles inside a cell.

Of the three molecular components, cysteine is perhaps the most important. Cysteine is the rate-limiting molecule, meaning that the production of glutathione relies on how much cysteine there is available. Glycine and glutamic acid are not rate-limiting for glutathione production, because they are plentiful compared to cysteine.

Cysteine is also a conditionally essential amino acid, meaning that although the body can produce some of the cysteine that it needs, the body also require cysteine through the diet if enough cannot be produced. The body’s production of cysteine cannot keep up when glutathione production is increased in the case of illness, disease, and toxin exposure. Do note that, if oxidative stress and toxins are increased, the body uses more glutathione to combat it.

For example, egg whites contain the amino acid cysteine. When an egg is cracked and left sitting out for a while, cysteine’s sulfhydryl group reacts with the free radicals that are in the air/environment by donating an electron (oxidation), thereby rebalancing the radical molecule. And after that happens, you can quite literally “smell” the aftermath of the reaction as rotten eggs.

Reduced glutathione is the active form of glutathione that acts as an antioxidant by absorbing or bonding to the free radical electrons that are let loose/produced when an oxidation reaction occurs.

Also know that observing the ratio of GSH to GSSG inside our cells can be used to measure cellular toxicity. Normally, healthy cells have about 90% of glutathione in its reduced form.

Without sufficient levels of active glutathione, our cells and our DNA are likely to be damaged by free radicals.

Regulation of glutathione in our Cells

Glutathione Peroxidase (Gpx1), although useful to the cell by neutralizing hydrogen peroxide free radicals, is not apparently required for cell survival, as seen through Gpx1 knockout mice (mice that don’t have the gene to produce Glutathione Peroxidase) who don’t show any signs of physical illness when compared to regular wild mice.

The knockout of the Gpx1 gene also doesn’t cause the mice to be more susceptible to dietary, selenium, and vitamin E deficiencies.

The Ratio of GSH to GSSG Changes with Age

When there is too much GSSG in our body, enzymes are made that build more GSH, the reduced form of glutathione. Most of the time, more GSH is built in the liver, the organ of our body responsible for detoxification. Also note that the liver is the organ that has the highest concentration of glutathione per cell.

Do note that it was observed that old people who live longer than other old people generally had higher levels of GSH than normal for their age group. That may indicate that glutathione may be important for life-extension purposes.

The Function of Glutathione

Glutathione is the Master Antioxidant

If a glutathione molecule is oxidized by donating an electron, it becomes glutathione disulfide- also known as L-glutathione

Once a glutathione molecule is oxidized, it can be reduced back (gain back an electron) through the use of the glutathione reductase enzyme and NADPH as an electron donor.

So how does glutathione help in the growth & division of cells? Well, the process that a cell undergoes in order to develop & divide is very complex, and can easily be disturbed by a ROS reacting with it. When a cell is damaged, the cell commits suicide (apoptosis) in order to prevent itself from becoming cancerous. What glutathione does is simply reduce the reactive oxides (i.e. hydrogen peroxide H2O2) inside the cell so that it doesn’t interfere with the process of cell division.

Glutathione is essential for our body’s ability to handle toxins. Glutathione effectively detoxifies heavy metals, pesticides, food preservatives and environmental pollutants other toxic substances, after the liver initially “detoxifies” them by changing them into free radicals. In this way our liver absolutely requires glutathione for the detoxification of toxins.

The liver also has cells called “parenchymal cells, which sends GSH to the blood plasma. In the blood plasma, GSH serves the function of neutralizing free radicals, toxin, and also heavy metals.

I personally believe that glutathione is extremely important for the healthy development & function of the brain. To understand my point, let’s take a look at autistic children.

Autistic children have cells with impaired mitochondria that produce less-than-normal amounts of ATP, and if this is also true for the brain cells, then it would explain the observed reduction in brain function & neuronal development. I believe mitochondria can become impaired from being exposed to high levels of free radicals.

Indeed, a study[4] shows that the autistic children’s brain cell mitochondria are exposed to a higher-than-normal load of free radicals. Specifically, it was observed that children with autism have higher-than-normal mitochondrial rates of hydrogen peroxide (free radical) production. This indicates that there is a lack of sufficient antioxidants, especially the main one GSH glutathione. Because if there is sufficient amounts of GSH glutathione, then one can assume that the level of oxidative stress would be lower.

And indeed, autistic children show improvements in their symptoms when supplemented with N-acetylcysteine (NAC), which provides the the precursor molecule cysteine for the body to use. Remember, cysteine is the rate-limiting amino acid required for the production of GSH glutathione. So supplementing NAC would in effect boost a person’s level of GSH glutathione in the body.

So in one study[5], researchers gave an autistic child 800 mg per day of NAC to boost active glutathione levels, in order to combat the raised oxidative stress & neuroinflammation that is thought to cause autism in children. Through a period of two months, the researchers observed improvements in autistic symptoms, social interaction and aggressive behavior.

So does boosting glutathione through NAC only seem to benefit autistic patients? Well, NAC was found by researchers[6] to help patients with with direct injuries such astraumatic brain injury, cerebral ischemia, and in treatment of cerebrovascular vasospasm after subarachnoid hemorrhage. I believe that NAC has a wide range of action for neurological problems. I believe that raising glutathione levels through NAC supplementation may decrease the amount of proteins that are misfolded in the brain.

When the number of proteins misfolded in the brain increases in number overtime, they end up causing amyloid diseases such as Alzheimer’s disease, Parkinson’s disease, and Huntington’s disease. That’s why you can observe that it is usually the older generation of people who end up getting age-related neurological problems like the ones I just mentioned.

Glutathione comes into the picture, because active GSH glutathione protects against oxidative stress. Oxidative stress is one of the triggers or causes for the misfolding of proteins.